I recently had time to take a 2 week road trip.  Based on the emails I received from Katherine Chesson of the National Parks Foundation, I was inspired to hit the road in my 2019 Chevrolet Bolt, an all electric vehicle, to visit our national parks – many of which I had never been to.  I planned for a two week road trip, but as my vacation evolved, I drove for over 6,500 miles and was gone for 5 weeks.  I visited 10 states, 12 national parks, and 1 national monument.  It was a great adventure that spontaneously just became!

This post is to share part of the trip and offer some suggestions for the parks to attract a growing segment of the traveling world – Electric Vehicle Owners.

This is a map of the route I actually took.  I started in Carlsbad, CA, travel north up through OR, WA, ID, MT, and then back down to WY, UT, then south to northern CO, then down to southern CO, over to UT, NV and then back home.  Each icon represents where I charged my car.

I want to let you know that as far as the growing EV world, getting to and through these destinations is a lot of work.  Based on my trip that started on 8/2/2020 and ended on 9/5/2020, I had to plan more than I should have to complete the trip.  And even when I got to a destination, I had a hard time enjoying the park at times because I had to worry about where my next charge would be coming from.

If the world really is going green, and the projection of EV car ownership is to be 7 to 10% by 2025, then the National Park Service really needs to step up the game to be EV ready.  From my experience, this is what I found at the national parks for Electric Vehicle Charging:

Lassen – two level two chargers were just installed but not operational in Aug 2020.  However, because of the cell service limitations, even if they were operational, there was no way I could charge my car because most services require data connection to an app to start the charger.

Crater Lake – two level two chargers were available at the south visitor center and they were free.  Very useful, but 4 cars were having to share the plugs to get some charge

Glacier – There were two Tesla charging stations at one of the lodging areas that provided level 2 power. I happened upon them by chance but too late (and too slow) for me to charge to visit the northern parts of the park.

Yellowstone – several level two chargers in Mammoth and two level two charger area at Old Faithful.  Until I found the Mammoth chargers, I didn’t know if I could complete the full northern loop.  This caused me lots of angst as I kept looking for a charge.

I camped at Madison Campground in the park and although no official charger was available, I parked in a OFFICIAL PARKING ONLY spot to plug into a 110 outlet that gave me the minimal miles over night before I had to unplug before the staff arrived.

At Old Faithful, one area was setup for Teslas (which were filled) and another area existed but no one, hotel staff or Park Rangers, could tell me where they were.  I actually had to go to one of the hotels and ask for a WIFI code so I could find out where the chargers were on my app (I have T-Mobile and my service was basically dead – it seems Verizon is the only service that was reliable).  Once I was able to get the location in my Plugshare app, I found the EV charging station very easily, however, there were no accessible restrooms as it was back behind the cabins from one of the hotels.

Grand Teton – I could not find an EV charging station.  However, between travel from Yellowstone, through Grand Tetons, I was able to pull into Jackson WY where there were plenty of charging stations.  The City has done wonders to promote an EV friendliness.  I pulled into the station with just over 20 miles to spare – this is what we EV drivers call Range Anxiety. 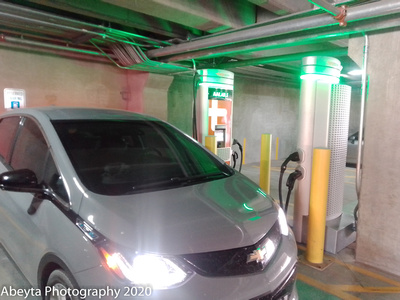 Great Sand Dunes – This park was a bit tricky. I left Trinidad Colorado with a full charge with the plan to charge in Alamosa. I didn’t intend to stop at this park until i realized it wasn’t that far off CO 160. I didn’t feel comfortable enough venturing too far into the park as I wasn’t sure how much battery it would eat up because I didn’t know the terrain. As it turns out, I made it to Alamosa with 32% of my battery left. But Alamosa had only Level 2 chargers and I still had to make it to Pagosa Springs for a FULL charge and for that, I had to travel over Wolf Creek Pass and I knew that climb would eat up everything I could put into my battery. Luckily there was a downhill from 10,857 feet so i gained some charge back on regen.

Mesa Verde – There are Tesla Destination and J-1772 chargers located in the park at the Fairview Lodge. I did note them in Plugshare and I did go looking for them. They were nestled in the cabins at the lodge. In some locations, i did feel weird about plugging into “RESORT ONLY” looking chargers because I have gone to several hotels in the past where these chargers were deemed “GUESTS ONLY”. Luckily I didn’t need the charge because I charged in Cortez CO the night before and entered MV on a full charge – but i need that to get to Moab that same day.

Arches – no EV charging stations that I could find but I was able to charge on a free level 3 charging station in Moab.  However, I also wanted to go to Canyon Lands since it was so close, but as my next national park was Bryce Canyon, I couldn’t chance not having enough of a charge to leap to Green River then to Richfield then to Bryce Canyon.

Bryce Canyon – no EV charging stations that I could find, however, Best Western Plus Ruby in had 4 level two stations (3 of them working) but all three were occupied – one with a Tesla and two with gas cars which should have parked somewhere else.  I had to wake up at 4am to see if a parking spot had opened up and luckily it did.  I was able to charge enough to go back into the park and then have enough charge to get me to Zion.

Zion – two level two EV Chargers were located near the visitor center. I had to drive by it twice over a couple of hours to get to a spot that had just opened up. 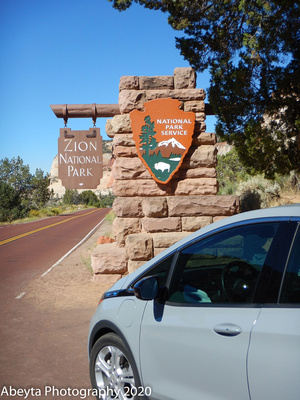 Now, If I had a gas car, I would have had no problem.  However, if you have ever driven an electric vehicle in anything other than a commuter capacity, you would know that you need to be flexible and you need to plan a lot because the EV Charging Stations aren’t as plentiful as gas stations (part of the reason my trip expanded).

One of my biggest logistical challenges was trying to get across northern Wyoming and South Dakota to visit Badlands National Park and Mt. Rushmore and then over to Minneapolis to visit my baby sister.  As it turns out, I could make it across WY, however, getting through SD was the biggest challenge.  I reached out to the SD department of tourism, however, their answer didn’t give me much hope of crossing the state before I’d have to call AAA for a tow to a charging station.  So, I had to scrap that idea as I reached Wyoming.

My fear is that not many people are comfortable enough to take their EVs on long trips or vacations (that include National Parks) so they either drive their gas cars (ICE) or just don’t go as many families are purchasing all electric vehicles.

With some planning and EV Charger installations at the parks (or surrounding area), a whole new group of people could participate and visit the beautiful National Parks.

Since the original post, I had a conversation with someone close to the NPS regarding the EV charging infrastructure. As it turns out, NPS is expending knowledgeable resources and has an active commitment to improving what exists. Based on what exists, the NPS should publish what exists and what their plans are. This would be a very useful PSA to put out to the EV driving public.